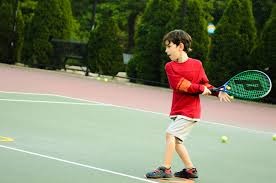 Eagle Idaho has many kinds of options for Tennis Camps and Clubs and those in the know tell us that an indoor facility is in the works within the next few years in or near downtown Eagle, most likely at highway 44 and State Street.

The “Tennis in Eagle” Elementary Summer Camp we will be held this summer at Eagle Middle School for children, grades K-6 for three sessions from June to August. The program will provide all the equipment and everything else a young player could want. The program would definitely like to see their tennis enrollment numbers soar as tennis becomes more and more popular in the Boise area.

Eagle Middle School is located at 1000 W. Floating Feather Road, Eagle, Idaho, 83616, and the dates for the camp will be Mondays through Thursdays, June 11th through June 21th. A second session will run July 9th through July 19th with a third session going July 23rd through August 2nd. Go ahead and Search for Homes near Eagle Middle School.

The word on the street is a new indoor tennis facility is in the early planning stages. This facility will certainly have high demand as right now the closest indoor courts are at the Boise Racquet Club – a 20 minute drive down State Street. This proposed new major tennis club will offer a number of amenities including 12 indoor courts (including two clay court as well as a stadium court) a restaurant, locker rooms and a fitness center, in addition to plenty of parking and a new Starbucks in the same parking lot. It will be heated in the winter and air conditioned in the summer so people can play year round.

It will cater to the more than 4,500 USTA members in the Treasure Valley.  As of right now, there are only 18 indoor courts in all of Ada and Canyon Counties combined. The name that is being proposed is the Eagle Tennis Club.